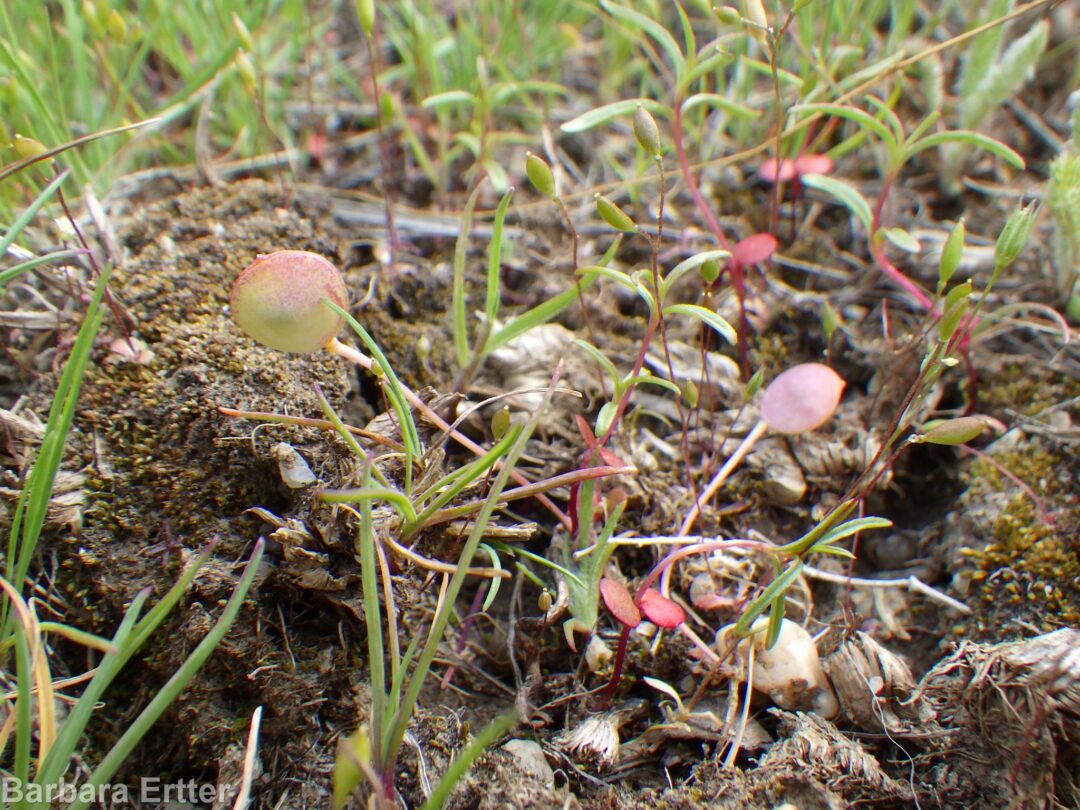 Idahoa or pepperpod was originally described in 1830 by William Jackson Hooker as Platyspermum scapigerum, aptly designating the individual flat seed pods (“platyspermum”) perched atop a slender leafless stem (“scapigerum”).  Hooker coined the name for specimens collected by David Douglas in 1825 near “the Great Falls of the Columbia”.  The Great Falls of the Columbia, better known as Celilo Falls, were a major fishing and trading area for Native Americans prior to being flooded behind The Dalles Dam in 1957.

However, the name Platyspermum had previously been used for a genus in the carrot (Apiaceae or Umbelliferae) family, meaning that a different genus name was needed.  In 1913, Aven Nelson, the first professor of botany at the University of Wyoming, and J. Francis Macbride, his protege from Idaho, accordingly decided to create the name Idahoa for this single species, noting that “This peculiar and well known crucifer occurs sparingly in Washington, Oregon, and Idaho, but apparently is met with most frequently in western Idaho (from the Panhandle to Nevada), hence the choice of name.”  The species also occurs in southwestern Montana and northern California.

In addition to the draw of its name, commemorating the state of Idaho, Idahoa has a cuteness that exceeds its tiny stature and minute flowers, especially when the purple-speckled pods are fully developed.  This was acknowledged by Noel Holmgren in his 2005 treatment of Brassicaceae for Intermountain Flora, where he refers to Idahoa scapigera as “perhaps the most unique and appealing of those members of the mustard family endemic to western North America” (Interm. Fl. 2b: 387).

At least in cultivation, Idahoa germinates when the rains fall in late fall or early winter, with the rosette of succulent leaves overwintering under the snow.  Once released by spring thaw, plants quickly put up their tiny white flowers, followed shortly by the distinctive flattened pods.  This overwintering strategy unfortunately puts the species into direct competition with the numerous non-natives who do the same.  As a result, Idahoa is now rarely encountered and probably in danger of disappearing from the foothills altogether.  This is in contrast to its former abundance, alluded to by Nelson and Macbride and also by Bernice Bjornson, who wrote this about the species in 1946:

“Pepperpod, so called by children who eat the pods, is Platyspermum scapigerum.  It is an early riser.  Before most people begin to think of looking for spring flowers this little plant has sprouted, grown, and produced its tiny white flowers.  Early in April one is fortunate to find the leaves still green, for the seeds are almost mature by that time and the life of the plant is nearly over.  Look closely at the ground in moist sandy or gravelly places, for this plant grows at the most only 4 inches high.  Its compressed, almost circular pod, is curiously purple spotted.  It is these pods which make the plant interesting.”