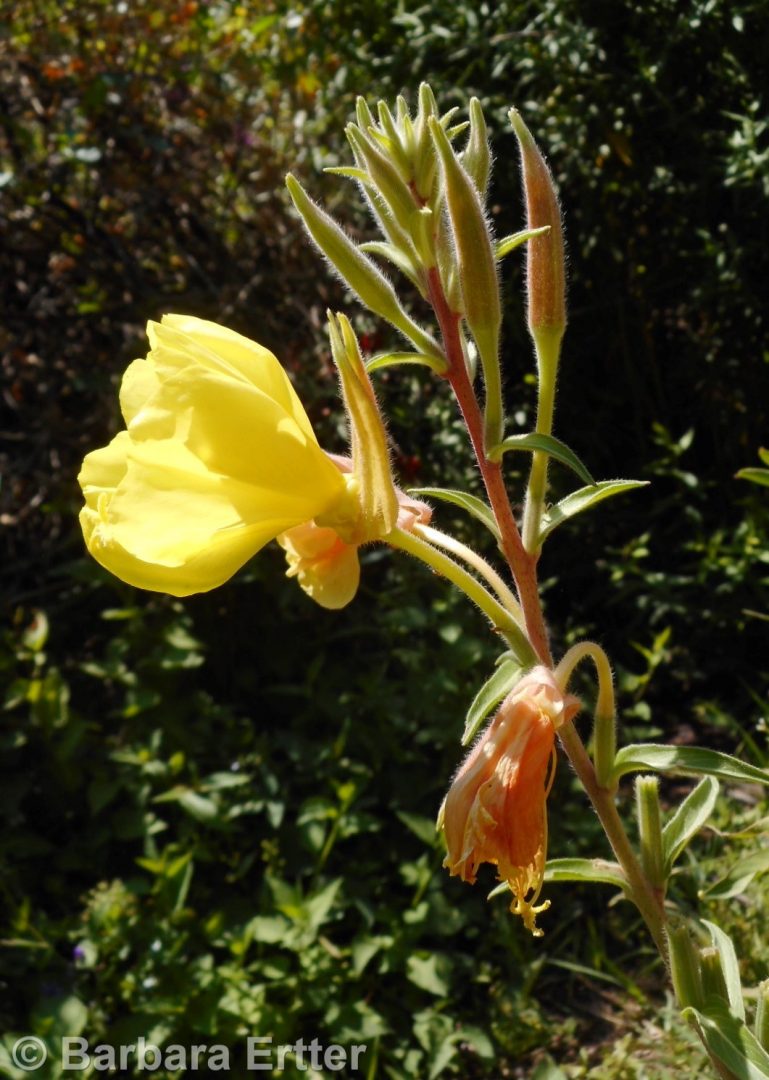 Our tall, erect evening-primrose with relatively large yellow flowers (petals nearly 2 inches long, fading reddish) is currently treated as Oenothera elata ssp. hirsutissima.  In earlier treatments, it was sometimes called Oenothera hookeri, which is the source of the only known available common name, even though hookeri proper is now considered to be a separate subspecies (O. elata ssp. hookeri) that only grows in California.

Another name it was briefly known as is Onagra macbrideae, named in 1911 by Aven Nelson to honor Mrs. C. M. Macbride, “who so industriously and discriminatingly assisted her son in the field work during most of the season of 1910” (Botanical Gazette 52: 269).  The son in question is J. Francis Macbride, the first plant collector to grow up in Idaho, who then went on to become an accomplished professional botanist at the Field Museum in Chicago.  He makes his debut in print in the same article by Aven Nelson, first professor of botany at the University of Wyoming, that describes Onagra macbrideae and numerous other species collected by J. F. Macbride (and evidently his mother):

“Early in 1910 specimens were received from J. Francis Macbride for determination.  In the correspondence that developed it was soon apparent that he was a close observer and deeply interested in the flora of his neighborhood and state.  A proposition from him to collect for the Rocky Mountain Herbarium [at University of Wyoming] led to the discovery that he was a boy just out of Boise High School.  An agreement was soon reached whereby he was to undertake field work in some part of Idaho. . . . [It was agreed that] southwestern Idaho was practically unexplored, particularly the whole Owyhee region including the mountains of that name.”  Macbride eventually became a student of Nelson, co-publishing additional new species and completing his A.B. in 1914.

The evening-primrose named for Mrs. Macbride was one of the numerous species collected in the Owyhees.  Nelson considered it to be a different species than a similar evening-primrose collected by Macbride from the Boise Front, described in the same publication as Onagra ornata;.  According to Nelson, “Two such splendid plants as these by one collector [and his mother], seem quite an achievement for one season.  In so limited a genus, since both are from the same state, one might suspect that they should be united, but that is impossible, for one [ornata] is a coarse, pubescent, spreading biennial with woody stems and crowded inflorescence; the other [macbrideae] a glabrate, erect, herbaceous annual with few and much larger flowers.”   Nevertheless, both names are now included within Oenothera elata ssp. hirsutissima.

Nelson also presents the evidence that both collections are native, and not simply escaped garden plants of commonly cultivated European relatives.  Regarding Onagra ornata:  “This highly beautiful evening primrose, coming as it does from a state supposedly fairly well worked, is a distinct surprise.  Doubtless, however, it is an indigenous plant [since distinct from anything in existing treatments].”  And for Onagra macbrideae:  “That this species is indigenous can scarcely be doubted.  It was secured more than 50 miles from a railroad in a practically uninhabited desert area in the Owyhee Mountains, Idaho.”

Bernice Bjornson had this to say about the genus Oenothera in 1946, quoting an even earlier source specific to O. hookeri:  “Without doubt the evening primroses are among our most attractive wild flowers. Most of them are also fragrant. These flowers depend on moths to do the job of transferring pollen. White and yellow colors predominate, because they are most easily seen at night; and the moth once finding the flower, its long tongue serves him well in getting nectar where it forms at the base of the tube.

“The following description of Oenothera hookeri was written by Charles Francis Saunders:  ‘At sunset of summer evenings, the unfolding of the buds makes a delightful motion picture. Under the watcher’s very eyes the calyx splits and falls apart, the corolla little by little swells, untangles its golden petals one from another, until at last the flower flashes out in the dusk full blown. “The leap of buds into ripe flowers,” is the way the poet Keats poetizes the event. All night the flower glows like the ghost of a miniature sun, but with returning day closes and withers.’”