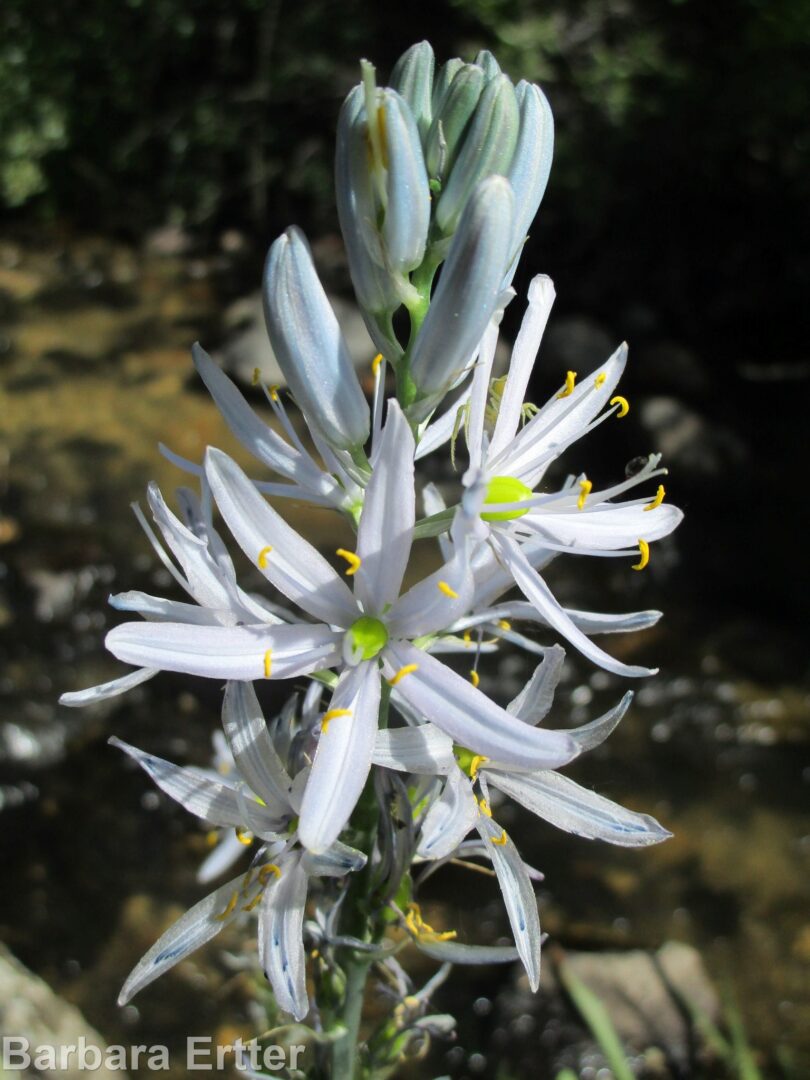 Bernice Bjornson had this this to say about camas in 1946:

“The camas we have found, Camassia Quamash, varies in color from a light slate blue to dark blue. . . . At flowering time the undisturbed camas meadows look at a distance like lakes of blue water.  The Indians called this plant “camass” and botanists have adopted the word for the scientific name, merely giving it a Latin form.  In Indian history and also in the history of the white man in the early days out West the camas was an important item in their diets. It saved many an early Westerner from starvation.  It still is important to the Indian; but with an abundance now of cultivated plants from which he can get food easily the white man no longer gathers the bulbs of camas.

“Of all the food plants used by the Western Indians the camas was the most important and widely known. There is more romance and adventure clustered about the camas root and flower than about almost any other American plant. Hardly one of the early Pacific explorers but records how at some time the camas has saved him from extreme hunger, if not from actual starvation, and in the traditions of the Indians it was given a prominent place; many mythical tales are told of its origin and uses.

“The camas fields were tribal property, jealously guarded against the trespass of rival clans. Wars were sometimes caused by disputes over questions of possession or boundary, nor could the Indians understand why the white man was privileged to usurp these possessions, and destroy the camas meadows with his plow. The Nez Perce War under the able leadership of Chief Joseph was a final desperate protest against these trespasses upon their fields.

“That the Indians still love camas is testified by the following directions for cooking the root, given me by a young Nez Perce girl, herself a direct descendent of Chief Joseph: ‘We make a hole in the ground,’ she states, ‘line it with flat stones and build a fire upon them. When the stones are red-hot we rake out the coals, and cover the hot stones with a certain kind of wild grass found only in the mountains. Then upon the grass we place the camas, and over this place another layer of grass. We then cover all, first with gunnysacks and then with dirt, and over all we build a fire which is kept burning for two nights and a day.  The pit,’ she further stated, ‘must not be opened or poked into during this time, or the camas will be spoiled.’ So delicate was the operation of tending the camas pit, that only the oldest and most experienced women of the tribe were trusted with its care. The modern Nez Perce eat their camas with sugar and cream, luxuries of which their forefathers, of course, knew nothing.”

“John K. Townsend, a Philadelphian who published an interesting narrative of a journey to the Rocky Mountains in 1839, has left us a pleasant, old-fashioned picture of a Camas feast in central Idaho. ‘In the afternoon,’ he writes, ‘we arrived at Kamas Prairie, so called from vast abundance of this succulent root which it produces. The plain is a beautiful level one of about a mile over, hemmed in by low, rocky hills, and in spring the pretty blue flowers of the Kamas are said to give it a peculiar and very pleasing appearance….We encamped here near a small branch of the Mallade River; and soon after all hands took their kettles and scattered over the prairie to dig a mess of Kamas. We were of course eminently successful, and were furnished with an excellent and wholesome meal. When boiled, this little root is palatable and somewhat resembles the taste of the common potato. The Indian method of preparing it, however, is the best’.”