Recommended for Mid-May to Mid-June

Although largely through relatively low-diversity altered pastureland, patches of interesting wildflowers, habitat diversity, and wide views makes this walk a good intermediate-distance loop in one of the less-used parts of Military Reserve.  The elongate loop traverses in and out around tributaries of Freestone Creek, well above the stream except where it crosses at the far end.  The full loop is nearly 4 miles, with 420 foot elevation gain.  Most trails have a relatively high clay content, so best used when fully dry.  The trails are popular with mountain bikers, so be prepared to share.

Stage 1:  Starting from Three Bears Trailhead at the end of the public section of Mountain Cove Road, take Ridge Crest Trail (#30) up a north-facing slope to the ridge line; keep left to Bucktail trail (0.4 mi).  The lovely knoll between the trailhead and the archery range has a nice display of  arrowleaf balsamroot (Balsamorhiza sagittata), longspur lupine (Lupinus arbustus), and other wildflowers; enjoy from the trail, since the heavy clay soils are easily compacted.  A localized population of Hotrock penstemon (Penstemon deustus), occurring near a bend in the trail, is one of the special plants on this trail; the plant is more commonly found on rocky outcrops, not open clay slopes.

Bitterbrush (Purshia tridentata) is the most common shrub on the entire loop, coloring the hillsides yellow and scenting the air at peak bloom.  A conspicuous grayish shrub, near the trailhead and elsewhere in Military Reserve, is the fourwing saltbush (Atriplex canescens).  Although a common native shrub in much of the western US, including southwestern Idaho, this shrub was not present in Military Reserve when I was growing up; instead, it became established here after being included in post-fire seeding efforts several decades ago. 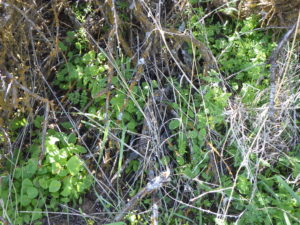 As the trail cuts across the north-facing slope just before reaching the ridge, keep an eye out for wildflowers in this habitat.  In particular, here and in similar settings elsewhere in the Boise Front, take a look to see what grows in the shelter of shrubs; if not displaced by invasive annual grasses and other weeds, there is often a nice diversity of small annuals (“belly flowers”), including miner’s-lettuce (Claytonia perfoliata) and “wedding-cake plant” (Plectritis macrocera).  Unfortunately, the invasive bur-chervil (Anthriscus caucalis), which is rapidly spreading in the Boise Front thanks to its velcro-covered fruits, has gained a foothold at this site as well.  In the accompanying photo, the bur-chervil has the fern-like leaves; it is probably only a matter of time before it displaces the round-leaved miner’s-lettuce and any other belly-flowers.

BUCKTAIL TRAIL IS CURRENTLY FOR CYCLISTS ONLY, AS PART OF A PILOT PROGRAM THROUGH AT LEAST NOVEMBER 2021.  A new pedestrian-only trail,  Two Point Trail, has been constructed parallel to Bucktrail Trail.  It has not yet been surveyed for this wildflower walk, but will probably have less to see since it will not be skirting the edge of the steep slope.

Stage 2:  Left on Bucktrail trail (1.3 mi).  This segment of the loop mostly winds through altered habitat managed as pastureland, dominated by non-native intermediate wheatgrass.  Native wildflower diversity is relatively low as a result, with the primary exception of some grazing-tolerant species such as pestle-parsnip (Lomatium nudicaule) and gray-green thistle (Cirsium cymosum var. canovirens).  Several species of hawksbeard (Crepis), shaggy fleabane (Erigeron pumilus var. intermedius), sagebrush sego-lily (Calochortus macrocarpus), and tapertip onion (Allium acuminatum) are also present, but generally bloom later than most other plants mentioned here.  One curiosity is the occasional young silver sagebrush (Artemisia cana) along the trail, differing from big sagebrush (Artemisia tridentata) in that the leaves are pointed instead of 3-toothed.  Although native to the West in general, silver sagebrush does not occur naturally in the foothills; these young plants were presumably planted as generic “sagebrush” in an early restoration attempt.

Additional diversity shows up where the trail approaches the edge of a steep slope, including Modoc hawksbeard (Crepis modocensis) and large-flower goldenweed (Pyrrocoma carthamoides), which is late-blooming species.

Stage 3:  Left on Shane’s Trail at a fourway junction.  This section of the loop traverses a the somewhat less modified habitat of a north-facing slope before continuing the gentle ascent to the junction with Three Bear Trail (which is the highest point on the loop).  A short distance before this junction, there is a small colony of a controversial plant that you will probably soon be seeing lots more of:  forage kochia (Bassia prostrata, alternatively in Kochia).  This Eurasian subshrub is currently one of the favored plants being intentionally seeded in massive fuel breaks throughout the arid West, in an effort to stop the spread of habitat-converting wildfires.  Whether this strategy is successful, or if the cure is worse than the disease, remains to be seen.

Stage 4:  Left on Three Bears Trail to Curlew Gulch creek crossing.  The trail descends along a ridge and north-facing slope, mostly with the same plants already seen until just above the creek.  In addition to several native willows (Salix sp.) and black cottonwood (Populus trichocarpa), shrubs include some non-native wild plums (Prunus domestica) and two different non-native wild roses:  eglantine rose (Rosa rubiginosa) with sticky leaves smelling of green apples, and non-sticky-leaved dog rose (Rosa canina).  A few plants of common wood-beauty (Drymocallis glandulosa) and ballhead waterleaf (Hydrophyllum capitatum) might also be in bloom.  A few open places near the creek crossing can serve as pleasant rest areas, with checkermallow (Sidalcea oregana) in bloom later in the season.  An old homestead ranch behind the creek crossing adds historical interest to the scenery.

Stage 5:  Above the creek, Three Bears Trail follows the ranch road  back to trailhead (do NOT go right on Freestone Ridge trail).  This segment of the loop features sandy south-facing roadcuts that have a new selection of flowers to enjoy, including silverleaf phacelia (Phacelia hastata), Oregon sunshine (Eriophyllum lanatum), pallid evening-primrose (Oenothera pallida), and wild-hyacinth (Triteleia grandiflora); early in spring you might even spot some Aase’s onion (Allium aaseae).  This fragile habitat is damaged in some places by cyclists creating banked turns above the established road.

At the lowermost stretch of Three Bears Trail, soils abruptly change from the characteristic sand of the Boise foothills to a distinctive heavy clay, derived from volcanic outcrops.  This is one of the few places in the Boise Front to see Bolander’s yampah (Perideridia bolanderi), locally abundant on the roadcuts and slopes.

NOTE: Please enjoy the wildflowers and leave them for others to enjoy.  Because our unique local flora is already under pressure from invasive weeds and habitat loss, harvesting of native plants is not encouraged on this website, especially along popular trails.